What is slowing down the dev process ? A data-driven approach

We build software everyday using the latest best practices. Decades of process improvements - that we are re-using as if they were obvious - have enabled us to ship code faster and with less risk. Let's pause and think about even semi-recent trends in DevOps:

In the meantime, in other fields such as manufacturing and order processing, manual processes are constantly being refactored and automated to serve customers faster and cheaper. In the past 20 years, a set of algorithms and techniques under the name of Process Mining have been developed to accomplish this constant optimization.

This got me curious: could we apply these algorithms to DevOps processes to identify bottlenecks and improve the developer experience?

What is Process Mining?

In short, process mining is distributed tracing for the real world. Let's look at an example:

As you can see, the inputs of process mining are very simple: it deals with events performed at a certain timestamp, grouped by a notion of case, which would be called a trace in the distributed tracing world. Usually, cases are performed by people and are repeated over many instances. You can add arbitrary properties such as who performed the action, etc.

The goal of process mining is to study the performance, frequency and other characteristics of real-world processes. Usually, the ultimate goal is to make a process run faster / cheaper, using some sort of automation or by re-ordering the process steps.

Why does it have to do with DevOps?

First, the world of DevOps is full of events: creating tickets, opening PRs, sending comments, running CI/CD jobs, deploying and rolling back, opening and closing incidents - the list goes on. These events are also fairly easy to access because of the high level of instrumentation provided by most dev tools. Finally, automation of manual processes is at the core of many DevOps activities. This makes the field an interesting candidate for applying process mining.

What if we could map DevOps activities to detect bottlenecks and automate manual steps?

In the rest of this article, we will apply process mining techniques to a typical development flow to try and do just that. We will provide an example dataset - you only need some level of familiarity with Python.

A study of a typical DevOps process

Note: all the code examples in this article are grouped together in the following Google Colab notebook. We highly recommend running it to follow the article steps

We are looking at a dataset of pull request - related events, comprising close to 2,000 PRs. The data has been extracted from systems such as Github, CircleCI and Kubernetes. The following events are used, and they are all keyed on the pr_id provided by Github:

Apart from opened, merged and deployed, all the events can happen multiple times, potentially creating loops and thus reflecting real-world interactions between authors and reviewers. Here is an example of a simple trace:

We can see that the PR completed in about an hour, with a fairly linear story and a pre-emptive approval (likely a very small fix to add before merging)

We will use the PM4PY library to run our explorations. It contains a set of common algorithms used in process mining.

First, we need to load our CSV file and turn into a format that PM4PY can work with. The main transformation happening here is renaming columns.

Since we are dealing with real-world processes, with the potential for noise and incomplete traces, we will also make sure that we constrain the start and end states by relying on our domain knowledge - making sure that opened is the only start event and that merged/deployed are the end events.

First, let's get an idea of the overall lead time of this process - meaning the total time it takes to go from opening to closing a PR.

This gives us an important reference, as we try to optimize the process in the following sections.

Now, let's see what our PR process looks like in practice. We will use the simplest algorithm, known as Directly Follows Graph (DFG), which links 2 steps together whenever one directly follows the other. Since it shows every single path, it is a pretty noisy representation, but it has the core advantage of being very simple to understand and thus to derive actionable information from. 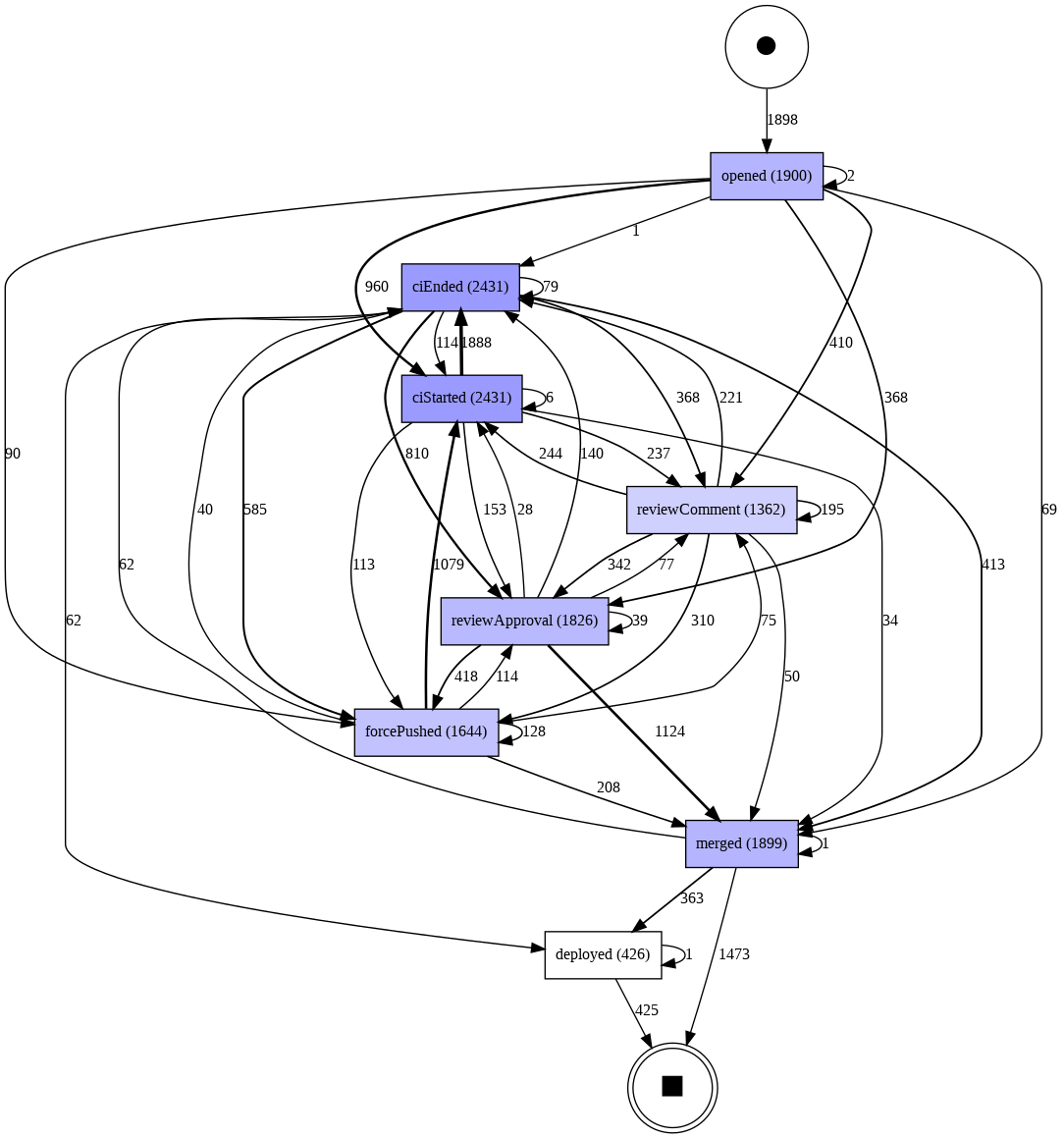 As you can see, there is a lot going on here, since we display every single path taken in the dataset. That said, we can already identify patterns:

The field of process mining has come up with very advanced algorithms that are much better at dealing with noise (ie infrequent paths in the process) and concurrent activities. The most advanced one is called Inductive Miner, let's apply it.

The algorithm has correctly discovered our process: a sequence from opened to deployed - you can even see the and operators highlighting the fact that CI and reviewing activities are happening concurrently.

Remembering our goal of finding process improvements, we need to find a more actionable path between these 2 extreme representations. We also want to understand how long each step is taking. We'll start from the DFG, since it is easier to interpret.

What did we do here ?

You can play with various aggregation measures; we chose the mean and the sum to help us derive useful actions. The sum is very useful because it aggregates both the duration and the frequency signals, giving us a good idea of how costly a path is. 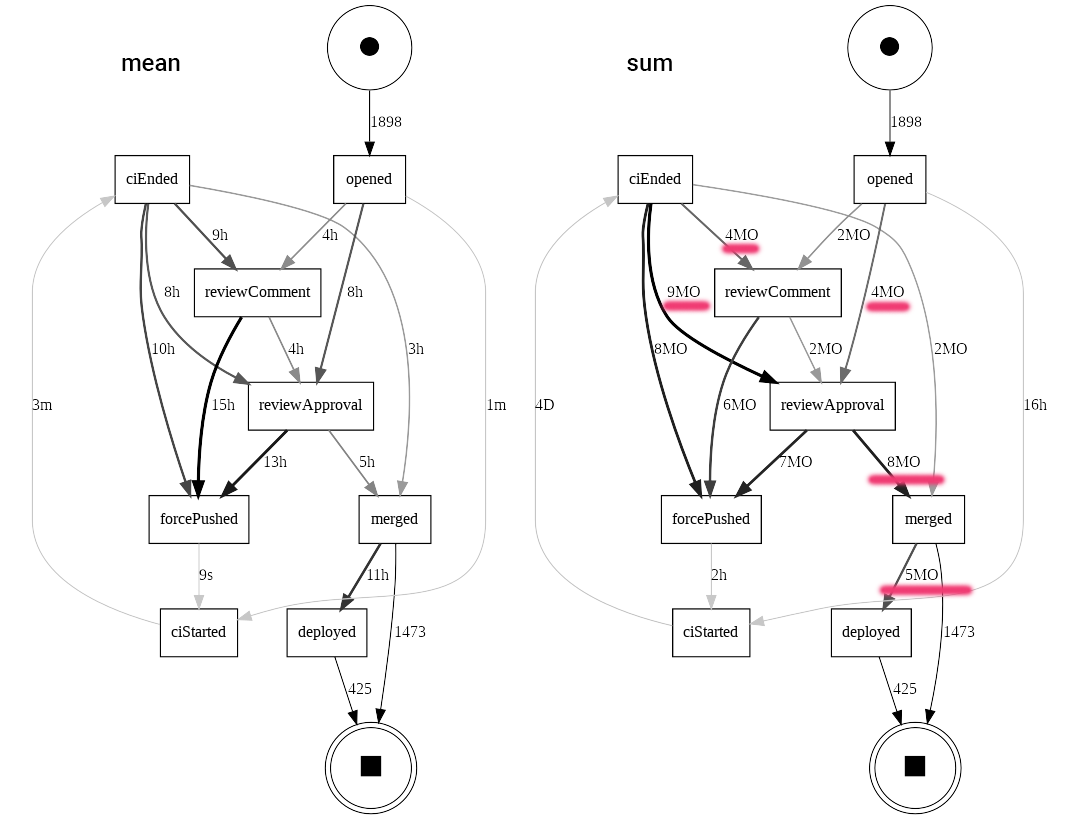 In terms of the structure of the process, we now have a much easier time understanding common paths.

We can more clearly see the loop from reviewComment .. forcePushed .. ciStarted .. ciEnded .. reviewComment, which reflects the interaction between reviewers and authors pushing new changes. The overall story of the process remains un-affected and is in line with what we discovered in previous sections.

We see that CI takes 3 min on average and consumes 4 days total. There is not much to optimize here, and CI is likely not a bottleneck. Although CI runs in parallel to other activities, this parallelism is more of a nice-to-have.

We won't bring any change to CI.

Looking at the more costly paths, I highlighted the reviewApproval .. merged and the merged .. deployed paths, consuming a total of 13 months (or a mean time of 16h). This seems really high relative to other steps in this process and relative to the overall lead time. Using our domain knowledge, we know that reviewApproval is all that's needed to allow merging and deploying.

This is a clear opportunity for automation through continuous deployment. We should look into automating merging and deploying once an approval has been secured.

Some costly paths don't call for any particular actions: anything preceding a forcePushed event likely means that the author is working on a new patch. There is nothing special to improve on from a process standpoint: writing good code takes time!

However, other paths could be optimized:

This likely means that the team could benefit from building notifications around the key handoffs between authors and reviewers. In particular, it seems that authors have to wait too long on reviewers to give them the first feedback on their PR.

While we cannot see exactly what happens between commenting and new commits, there is likely another handoff delay captured by that 15h average time, when a reviewer has answered but the author has not seen the comments yet.

We have scratched the surface of what is possible when applying process mining to DevOps. Here are some ideas to take this even further, both for this process and for the broader field of DevOps.

As an exercise to the reader:

As an extension to this study, we could look into other DevOps processes:

We hope that you enjoyed this article! Feel free to contact us to see how we could help with engineering analytics and reporting for your team. If you're curious for more, read our handbook or take a tour. We'd love to help.

Get the latest articles on engineering productivity.

Book a demo with our founders →